Nanaimo Free Press (1874-)
JavaScript is disabled for your browser. Some features of this site may not work without it. 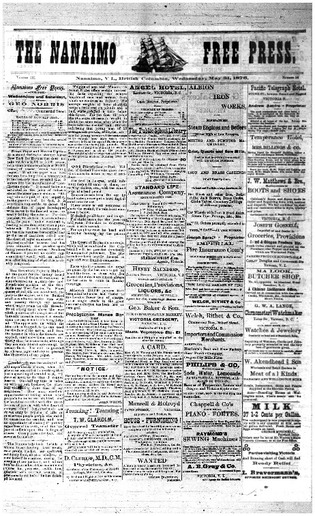 The Nanaimo Daily Free Press was founded by George Norris in 1874. It is the second-oldest newspaper in Vancouver Island. The Nanaimo Free Press’s first newspaper was published in April 15 of the same year. It started as a four page paper; published each Wednesday and Friday in a vacated Hudson’s Bay Company log house on Front Street in Nanaimo’s down town. In December 4, 1888, it expanded to daily publication, and moved into the new building on Chapel Street in June 1893. This building served for 103 years as the paper’s house. George Norris died in January 6, 1902. After he died, his son George E. Norris took over and published the paper with support from his brother W. F. Norris. He published newspapers until he died in 1919, and the ownership was sold to Thomas Banks Booth, who was the editor of the Free Press’ competition, the Herald. In the Nanaimo Free Press office, there were nine members in 1920, including Booth and his family, also the Norris family. He sold the Free Press in 1931, to the Free Press Ltd. This year was a difficult time for the newspaper, with the depression greatly reducing advertising revenue. It was bought by its rival the Herald in 1938, and began publishing on the Herald’s flatbed press. A few years after, in 1954, National chain Thomson Newspaper bought the Free Press. The publisher William Lupton immediately made changes to newspapers. The press changed to a high-speed rotary press, and the Chapel Street building also was renovated.

In April 1995, the paper’s title changed; the Free Press officially put the “daily” in its title. The newspaper was four pages long in most of the issues; however, the company increased the numbers of pages to eighteen when they celebrated its centennial. In April 12, 1997, the Free Press changed the name to Nanaimo Daily News. It began to use a sharper overall layout and greater use of colour, and added a second opinion page. In 1999, the Daily News’ printing facility had about 50 different presses running each week with more than one million individual printed products produced weekly. The paper itself had a daily readership of almost 30,000 which was higher than any other daily in Canada. The history of the Nanaimo Daily Free Press ended in 2016, when the ownership shifted from Glacier Media to Black Press. It was 141 year-long history.

Sub-communities within this community