Unsettling the Settlement Act: Land conflict in the past and present on Vancouver Island 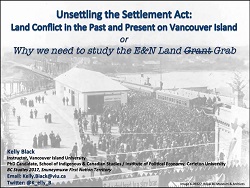 In 1883 the provincial government attempted to bring an end to speculation and debate about the transcontinental railway on Vancouver Island. Through the introduction of the Settlement Act the government intended to settle the question of the where and on what terms a railway would be built. The Act created the massive Esquimalt & Nanaimo Railway land grant, referred to as The Great Land Grab by the Hul’qumi’num Treaty Group, and generated legislation, court cases, and public inquiries that lasted decades. The settlement of a $49 million specific land claim agreement in 2016, between the Snuneymuxw First Nation and the Government of Canada, has demonstrated the ongoing influence of the Settlement Act. Despite its profound impact on colonization and property relations, the Settlement Act and its related events have been overlooked and understudied within BC history. This paper outlines the complexities of the act in an effort to demonstrate its place as an antecedent to land use conflicts in the present day. The lack of academic study related to the Act and the consequences for our understanding of BC History are also addressed. The paper argues that studying the Settlement Act and land grab can unsettle and disrupt our understanding of Settler – First Nation relations on Vancouver Island.