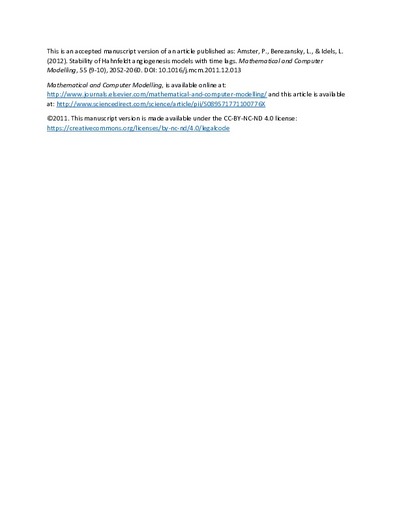 Mathematical models of angiogenesis, pioneered by Hahnfeldt, are under study. To enrich the dynamics of three models, we introduced biologically motivated time-varying delays. All models under study belong to a special class of nonlinear nonautonomous delay differential systems with non-Lipschitz nonlinearities. Explicit conditions for the existence of positive global solutions and the equilibria solutions were obtained. Based on a notion of an M-matrix, new results are presented for the global stability of the system and were used to prove local stability of one model. For a local stability of a second model, the recent result for a Lienard-type second-order differential equation with delays was used. It was shown that models with delays produce a complex and nontrivial dynamics. Some open problems are presented for further studies.

Except where otherwise noted, this item's license is described as Attribution-NonCommercial-NoDerivatives 4.0 International