Diversity among rare and common congeneric plant species from the Garry oak and Okanagan shrub-steppe ecosystems in British Columbia: Implications for conservation 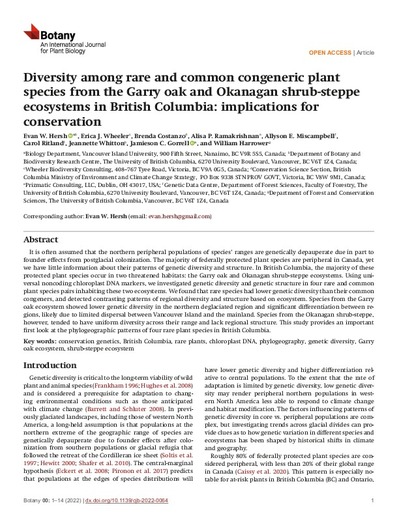 It is often assumed that the northern peripheral populations of species’ ranges are genetically depauperate due in part to founder effects from postglacial colonization. The majority of federally protected plant species are peripheral in Canada, yet we have little information about their patterns of genetic diversity and structure. In British Columbia, the majority of these protected plant species occur in two threatened habitats: the Garry oak and Okanagan shrub-steppe ecosystems. Using universal noncoding chloroplast DNA markers, we investigated genetic diversity and genetic structure in four rare and common plant species pairs inhabiting these two ecosystems.We found that rare species had lower genetic diversity than their common congeners, and detected contrasting patterns of regional diversity and structure based on ecosystem. Species from the Garry oak ecosystem showed lower genetic diversity in the northern deglaciated region and significant differentiation between regions, likely due to limited dispersal between Vancouver Island and the mainland. Species from the Okanagan shrub-steppe, however, tended to have uniform diversity across their range and lack regional structure. This study provides an important first look at the phylogeographic patterns of four rare plant species in British Columbia.