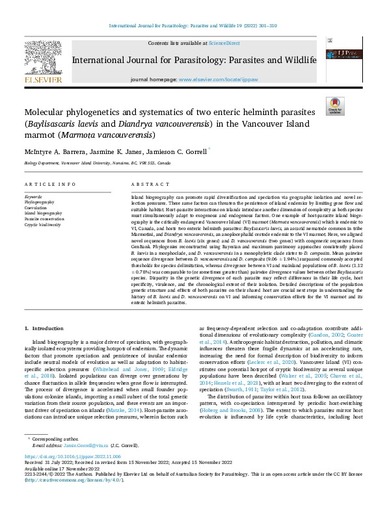 Island biogeography can promote rapid diversification and speciation via geographic isolation and novel selection pressures. These same factors can threaten the persistence of island endemics by limiting gene flow and suitable habitat. Host-parasite interactions on islands introduce another dimension of complexity as both species must simultaneously adapt to exogenous and endogenous factors. One example of host-parasite island biogeography is the critically endangered Vancouver Island (VI) marmot (Marmota vancouverensis) which is endemic to VI, Canada, and hosts two enteric helminth parasites: Baylisascaris laevis, an ascarid nematode common in tribe Marmotini, and Diandrya vancouverensis, an anoplocephalid cestode endemic to the VI marmot. Here, we aligned novel sequences from B. laevis (six genes) and D. vancouverensis (two genes) with congeneric sequences from GenBank. Phylogenies reconstructed using Bayesian and maximum parsimony approaches consistently placed B. laevis in a morphoclade, and D. vancouverensis in a monophyletic clade sister to D. composita. Mean pairwise sequence divergence between D. vancouverensis and D. composita (9.06 ± 1.94%) surpassed commonly accepted thresholds for species delimitation, whereas divergence between VI and mainland populations of B. laevis (1.12 ± 0.78%) was comparable to (or sometimes greater than) pairwise divergence values between other Baylisascaris species. Disparity in the genetic divergence of each parasite may reflect differences in their life cycle, host specificity, virulence, and the chronological extent of their isolation. Detailed descriptions of the population genetic structure and effects of both parasites on their shared host are crucial next steps in understanding the history of B. laevis and D. vancouverensis on VI and informing conservation efforts for the VI marmot and its enteric helminth parasites.