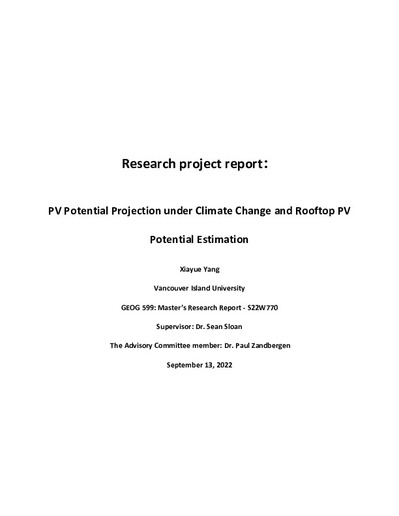 Climate change may cause changes in cloud cover to affect solar radiation, thereby affecting the solar PV potential. PV potential has an influence on the public's adoption of solar PV systems as well as the efficacy and efficiency of municipal PV subsidy schemes. The purpose of the research includes two main parts: the first is to examine the probable climate change impact on PV potential in Alberta and British Columbia, Canada, second is to evaluate the rooftop PV potential of a specific location with minor PV potential change from the result of the first part. Two sets of rooftops were selected for comparison. Set 1 describes a ‘complete set’ of rooftops. Set 2 describes a subset of relatively optimal rooftops for PV installation. The climate data of the solar radiation, temperature, and wind speed in 1995-2014 and 2031-2050 two periods from the CMIP6 were used to estimate the PV potential. The total Levelized Cost of Energy (LCOE) was calculated to analyze the economic feasibility of rooftop PV systems. The results show that climate change will mainly affect the future (2031-2050) PV potential by about 1%. The City of Vancouver with a small future PV change (-0.28%) was selected for the rooftop PV potential assessment. Area Solar Radiation tool from ArcGIS Pro was used to calculate the solar radiation of Vancouver. Rooftop PV power generation in Vancouver from Set 2 is approximately 7% of total electricity consumption yearly. In addition, most of the rooftops generated much more PV in July than in December. With subsidies from the government, the LCOE value of Set 2 rooftop PV is much lower than the BC average electricity price, and 96.2% of the Set 2 rooftop PV systems can pay for themselves within five years, while only 41.3% of Set 1 roofs can pay the investment back in a 5-year production. In conclusion, climate change in 2031-2050 is expected to have little effect on PV potential. Rooftop PV on suitable roof surfaces is economically feasible and can effectively reduce power consumption in Vancouver, especially in summer.