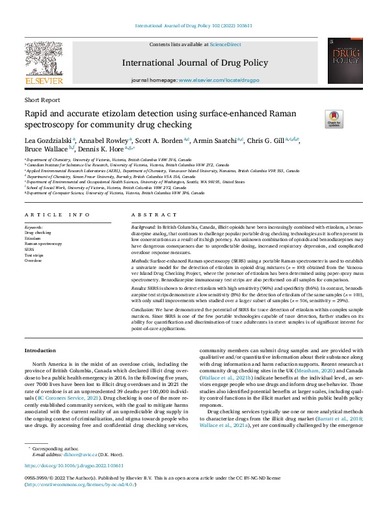 Background: In British Columbia, Canada, illicit opioids have been increasingly combined with etizolam, a benzo- diazepine analog, that continues to challenge popular portable drug checking technologies as it is often present in low concentrations as a result of its high potency. An unknown combination of opioids and benzodiazepines may have dangerous consequences due to unpredictable dosing, increased respiratory depression, and complicated overdose response measures. Methods: Surface-enhanced Raman spectroscopy (SERS) using a portable Raman spectrometer is used to establish a univariate model for the detection of etizolam in opioid drug mixtures (n= 100) obtained from the Vancouver Island Drug Checking Project, where the presence of etizolam has been determined using paper-spray mass spectrometry. Benzodiazepine immunoassay test strips are also performed on all samples for comparison. Results: SERS is shown to detect etizolam with high sensitivity (96%) and specificity (86%). In contrast, benzodiazepine test strips demonstrate a low sensitivity (8%) for the detection of etizolam of the same samples (n = 100), with only small improvements when studied over a larger subset of samples (n = 506, sensitivity = 29%). Conclusion: We have demonstrated the potential of SERS for trace detection of etizolam within complex sample matrices. Since SERS is one of the few portable technologies capable of trace detection, further studies on its ability for quantification and discrimination of trace adulterants in street samples is of significant interest for point-of-care applications.

Except where otherwise noted, this item's license is described as Attribution NonCommercial No Derivatives 4.0 International