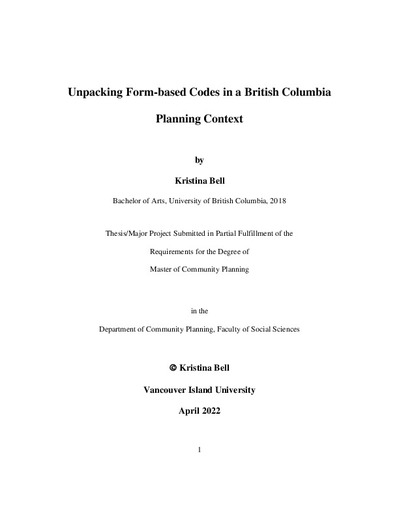 There is consensus amongst the critics of Euclidean zoning that the tool has produced undesirable, unsustainable, and inequitable places. However, without the existence of a revised zoning framework, a major issue in our land-use planning today is that we have modern goals of sustainable design, compact development, and equitable policy while using a regulatory tool that is based on outdated principles. Form-based codes (FBCs) have been advertised as the answer to our planning problems, yet there has been little uptake in British Columbia. This thesis explores the debate around zoning reform, and more specifically, form-based zoning. The research explores the applicability of FBCs to British Columbia planning by taking a legal perspective on the limits to the zoning power under the Local Government Act and explores whether local governments are approximating FBCs. By conducting a comparative case study analysis between Seaside, Florida and Whistler, British Columbia, this research finds that while the BC municipality may be approximating an FBC with other regulatory methods, these tools are inconsistent in achieving central goals of the FBC movement and add to an already complex development process. The study concludes with key learnings and recommendations on how to best move forward with zoning in British Columbia.