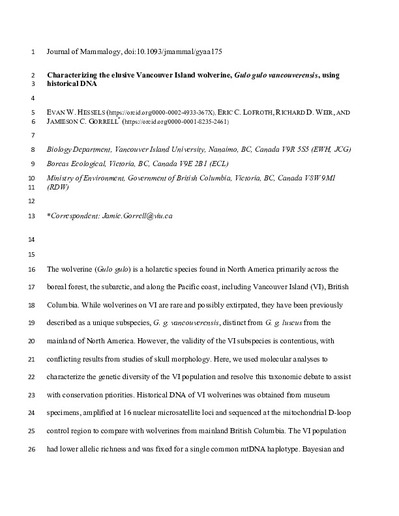 The wolverine (Gulo gulo) is a Holarctic species found in North America primarily across the boreal forest, the subarctic, and along the Pacific coast, including Vancouver Island (VI), British Columbia. While wolverines on VI are rare and possibly extirpated, they have been previously described as a unique subspecies, G. g. vancouverensis, distinct from G. g. luscus from the mainland of North America. However, the validity of the VI subspecies is contentious, with conflicting results from studies of skull morphology. Here, we used molecular analyses to characterize the genetic diversity of the VI population and resolve this taxonomic debate to assist with conservation priorities. Historical DNA of VI wolverines was obtained from museum specimens, amplified at 16 nuclear microsatellite loci, and sequenced at the mitochondrial D-loop control region to compare with wolverines from mainland British Columbia. The VI population had lower allelic richness and was fixed for a single common mtDNA haplotype. Bayesian and non-Bayesian assignments using microsatellites generally revealed admixture across populations, implying allele frequencies between the VI and mainland populations were not significantly different. Hence, both types of genetic markers showed little evolutionary divergence between VI and the mainland population. Combined, these results do not provide evidence of significant genetic distinction for VI wolverines, nor support the subspecific classification. Immediate conservation efforts should focus on estimating population size, while future conservation planning can assume VI wolverines likely are not a unique genetic population and there remains the potential for natural recolonization of wolverines to VI.