Genetic management on the brink of extinction: Sequencing microsatellites does not improve estimates of inbreeding in wild and captive Vancouver Island marmots (Marmota vancouverensis) 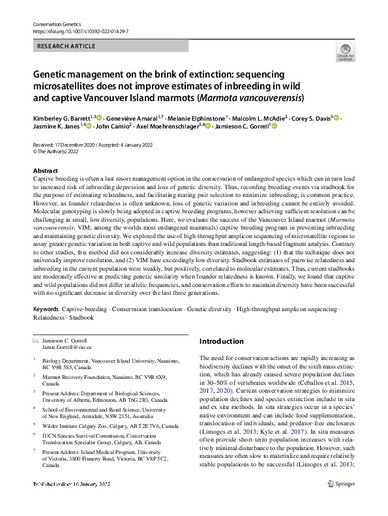 Captive breeding is often a last resort management option in the conservation of endangered species which can in turn lead to increased risk of inbreeding depression and loss of genetic diversity. Thus, recording breeding events via studbook for the purpose of estimating relatedness, and facilitating mating pair selection to minimize inbreeding, is common practice. However, as founder relatedness is often unknown, loss of genetic variation and inbreeding cannot be entirely avoided. Molecular genotyping is slowly being adopted in captive breeding programs, however achieving sufficient resolution can be challenging in small, low diversity, populations. Here, we evaluate the success of the Vancouver Island marmot (Marmota vancouverensis; VIM; among the worlds most endangered mammals) captive breeding program in preventing inbreeding and maintaining genetic diversity. We explored the use of high-throughput amplicon sequencing of microsatellite regions to assay greater genetic variation in both captive and wild populations than traditional length-based fragment analysis. Contrary to other studies, this method did not considerably increase diversity estimates, suggesting: (1) that the technique does not universally improve resolution, and (2) VIM have exceedingly low diversity. Studbook estimates of pairwise relatedness and inbreeding in the current population were weakly, but positively, correlated to molecular estimates. Thus, current studbooks are moderately effective at predicting genetic similarity when founder relatedness is known. Finally, we found that captive and wild populations did not differ in allelic frequencies, and conservation efforts to maintain diversity have been successful with no significant decrease in diversity over the last three generations.