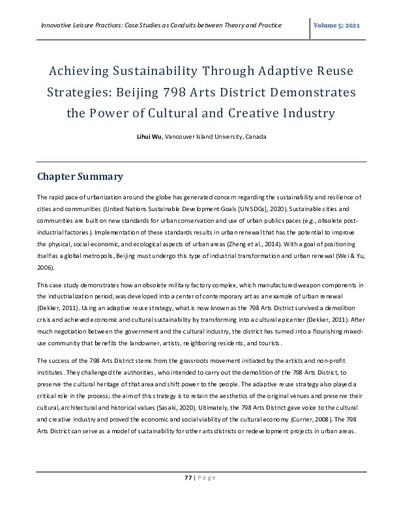 This case study demonstrates how an obsolete military factory complex, which manufactured weapon components in the industrialization period, was developed into a center of contemporary art as an example of urban renewal (Dekker, 2011). Using an adaptive reuse strategy, what is now known as the 798 Arts District survived a demolition crisis and achieved economic and cultural sustainability by transforming into a cultural epicenter (Dekker, 2011). After much negotiation between the government and the cultural industry, the district has turned into a flourishing mixed-use community that benefits the landowner, artists, neighboring residents, and tourists. The success of the 798 Arts District stems from the grassroots movement initiated by the artists and non-profit institutes. They challenged the authorities, who intended to carry out the demolition of the 798 Arts District, to preserve the cultural heritage of that area and shift power to the people. The adaptive reuse strategy also played a critical role in the process; the aim of this strategy is to retain the aesthetics of the original venues and preserve their cultural, architectural and historical values (Sasaki, 2020). Ultimately, the 798 Arts District gave voice to the cultural and creative industry and proved the economic and social viability of the cultural economy (Currier, 2008). The 798 Arts District can serve as a model of sustainability for other arts districts or redevelopment projects in urban areas.