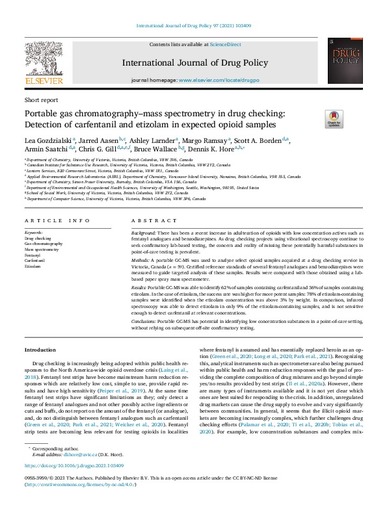 Background: There has been a recent increase in adulteration of opioids with low concentration actives such as fentanyl analogues and benzodiazepines. As drug checking projects using vibrational spectroscopy continue to seek confirmatory lab-based testing, the concern and reality of missing these potentially harmful substances in point-of-care testing is prevalent. Methods: A portable GC-MS was used to analyze select opioid samples acquired at a drug checking service in Victoria, Canada (n = 59). Certified reference standards of several fentanyl analogues and benzodiazepines were measured to guide targeted analysis of these samples. Results were compared with those obtained using a lab- based paper spray mass spectrometer. Results: Portable GC-MS was able to identify 62% of samples containing carfentanil and 36% of samples containing etizolam. In the case of etizolam, the success rate was higher for more potent samples: 78% of etizolam-containing samples were identified when the etizolam concentration was above 3% by weight. In comparison, infrared spectroscopy was able to detect etizolam in only 9% of the etizolam-containing samples, and is not sensitive enough to detect carfentanil at relevant concentrations. Conclusions: Portable GC-MS has potential in identifying low concentration substances in a point-of-care setting, without relying on subsequent off-site confirmatory testing.

Except where otherwise noted, this item's license is described as Attribution NonCommercial No Derivatives 4.0 International