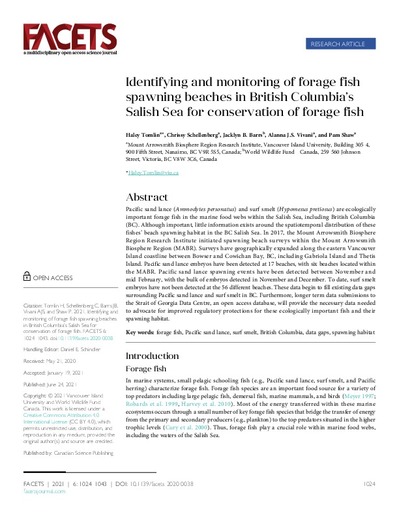 Pacific sand lance (Ammodytes personatus) and surf smelt (Hypomesus pretiosus) are ecologically important forage fish in the marine food webs within the Salish Sea, including British Columbia (BC). Although important, little information exists around the spatiotemporal distribution of these fishes’ beach spawning habitat in the BC Salish Sea. In 2017, the Mount Arrowsmith Biosphere Region Research Institute initiated spawning beach surveys within the Mount Arrowsmith Biosphere Region (MABR). Surveys have geographically expanded along the eastern Vancouver Island coastline between Bowser and Cowichan Bay, BC, including Gabriola Island and Thetis Island. Pacific sand lance embryos have been detected at 17 beaches, with six beaches located within the MABR. Pacific sand lance spawning events have been detected between November and mid February, with the bulk of embryos detected in November and December. To date, surf smelt embryos have not been detected at the 56 different beaches. These data begin to fill existing data gaps surrounding Pacific sand lance and surf smelt in BC. Furthermore, longer term data submissions to the Strait of Georgia Data Centre, an open access database, will provide the necessary data needed to advocate for improved regulatory protections for these ecologically important fish and their spawning habitat.