Explaining settlers to ourselves: Rethinking interpretive narratives at heritage sites 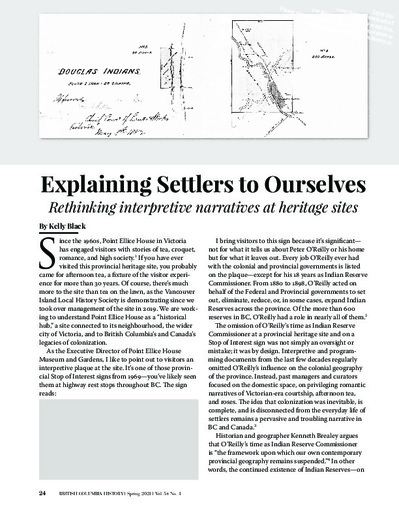 Since the 1960s, Point Ellice House in Victoria has engaged visitors with stories of tea, croquet, romance, and high society. Of course, there’s much more to the site than tea on the lawn, as the Vancouver Island Local History Society is demonstrating since we took over management of the site in 2019. We are working to understand Point Ellice House as a “historical hub,” a site connected to its neighbourhood, the wider city of Victoria, and to British Columbia’s and Canada’s legacies of colonization. When we started at Point Ellice House, our non-profit society began a reassessment and overhaul of the dated interpretation and training documents. We also continue to reimagine site programming; we’ve dropped 30 years of declining afternoon tea service in favour of storytelling and exhibits. Central to these changes is interpreting the house and its families within the context of the British Empire and settler colonialism.