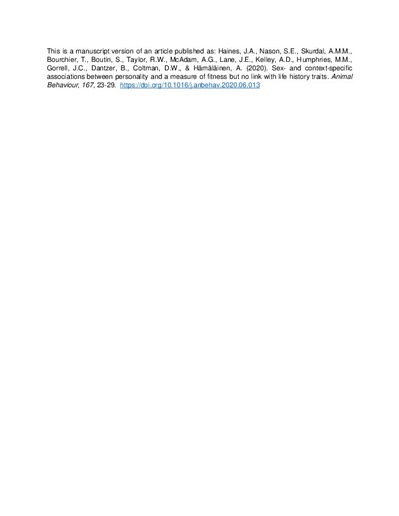 The pace-of-life syndrome hypothesis posits that personality traits (i.e. consistent individual differences in behaviour) are linked to life history and fitness. Specifically, fast-paced individuals are predicted to be proactive (i.e. active and aggressive) with an earlier age at first reproduction, a shorter life span and higher fecundity than slow-paced individuals. Environmental conditions and sex differences may be important in maintaining behavioural and life history variation in populations and may influence the covariance of personality with life history or lifetime fitness. However, these effects are rarely tested together. We investigated whether the occurrence of a resource pulse (called a mast year) during adulthood altered the associations between personality and life history traits or lifetime offspring production in adult North American red squirrels, Tamiasciurus hudsonicus. Despite accounting for environmental context during adulthood, we found no evidence of an overall pace-of-life syndrome in this population as personality was not associated with age at first reproduction or longevity in either sex. Males and females had similar activity levels, but females were more aggressive, potentially due to the fitness benefits of protecting their offspring from predation. In all females, regardless of mast experience, there was no association between activity and lifetime pup production, but there was a positive association between aggression and lifetime pup production. In males that experienced a mast, there was a positive association between lifetime pup production and both activity and aggression. In males that did not experience a mast, there was no association between activity and lifetime pup production, but there was a negative association between aggression and lifetime pup production. Lifetime recruit production (number of adult offspring recruited into the breeding population) in either sex was not influenced by activity or aggression regardless of mast experience. Overall, our results suggest that the infrequent occurrence of mast years may contribute to maintaining variation in personality traits in red squirrels.