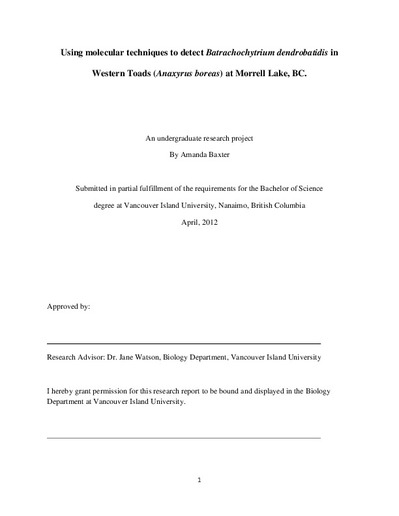 Amphibian populations are declining on a global scale. Many of these declines have been linked to the pathogenic fungus, Batrachochytrium dendrobatidis (Bd); the causative agent of chytridiomycosis. Chytridiomycosis, which infects the epidermis, spreads rapidly through amphibian populations in areas where it occurs. In this study, Western Toads (Anaxyrus boreas) from Morrell Lake, Nanaimo, BC were swabbed to test for the presence of Bd. DNA was extracted from the swabs and PCR methods were used to test for the presence of Bd. DNA was amplified using traditional PCR analysis, real-time PCR, and nested PCR methods to positively confirm the presence of Bd. The amplified DNA was sequenced to identify the haplotype(s) of Bd within the Morrell Lake toad population. A total of 5 out of 30 Western Toads were found to be infected with Bd (prevalence = 16.7%). Initially, real-time and nested PCR detected Bd in four toads that tested negative using traditional PCR; however, subsequent reanalysis using traditional PCR resulted in greater concordance between the three methods. The sequenced DNA was not pure enough to identify the specific haplotype(s) of Bd. This study provides evidence that Bd is present in Western Toad populations of Morrell Lake, but failed to determine the presence of multiple strains, which could indicate multiple infection events. These results support other studies suggesting that real-time and nested PCR methods can detect chytrid fungus zoospores at very low concentrations. Such high sensitivity will allow researchers to closely monitor populations for early signs (low levels) of chytridiomycosis infection in native amphibians.