Effectiveness of Braidy, the StoryBraid® as a tier-one classroom intervention 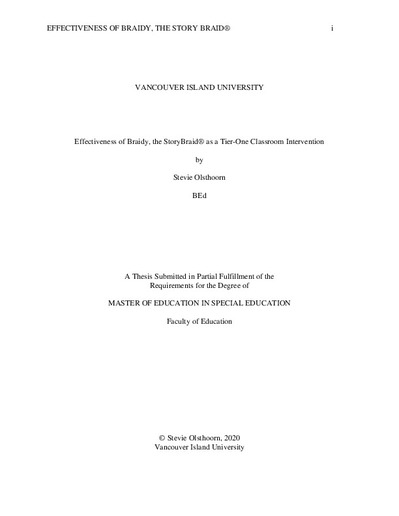 This research used a case study approach to explore the effectiveness of Braidy, the StoryBraid® as a tier-one, whole-class intervention in supporting students’ oral narrative and story retell. Braidy® is a visual and tactile tool used to support children in retelling and developing a story. Braidy® is made up of different icons that help children remember the important parts of a story, including: Character, Setting, Initiating Event, Internal Response, Plan, Attempts, Direct Consequences and Resolution. These components are essential to retelling and ultimately writing. The study took place in a kindergarten, grade one and two classroom. Students participated in the research three to four days per week over an eight-week period. The data collected in the study was qualitative in nature. Data was collected through three methods: lesson notes, journal of the researcher and students’ drawing/writing samples. Results proved Braidy, the StoryBraid® to be an effective tier-one, whole class support and in conjunction with other studies is a promising multi-tier level of support. Braidy, the StoryBraid® promoted the use of higher-level language through its engaging and tactile methodology. In this research, based on the findings, I find the Braidy, the StoryBraid® to be an effective program in supporting students’ oral language skills to recount personal narratives and stories.