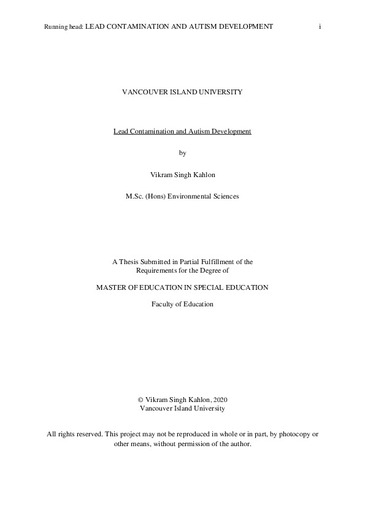 Autism Spectrum Disorder (ASD) is a neurodevelopmental disorder that pertains to social-emotional interaction, verbal and non-verbal communication, and atypical behaviours. Autism spectrum disorder is a wide spectrum condition that has many probable causes. Throughout history, several studies have been carried out to help explain the causes of autism spectrum disorder that include genetic, environmental, and other factors. The increasing presence of harmful and toxic substances increases the exposure rate. Many studies have shown a notable correlation between the exposure to toxic substances and the development of autism spectrum disorder. The most common toxic substances found, both natural and anthropogenic, are pesticides such as DDT, BHC, Aldrin, and heavy metals such as lead, arsenic, and mercury. These contaminants can easily cross the blood-brain barrier and result in changes in the brain structure. This paper investigates the relation between lead contamination and autism development through the research question, “What concentration of lead can result in autism?” to ascertain the connection between exposure to lead and autism development. A comprehensive research of literature was conducted, identifying relevant studies according to three themes: autism, lead as an environmental pollutant, and lead as the causative agent of autism. Fourteen studies were selected, on which narrative analysis was conducted. Significant limitations including paternal habits and molecular interaction of lead are discussed. Keeping in mind these limitations and the consideration of strength, it was concluded that lead, even in lower levels, is toxic to the proper development of children.