Early exploration of Nanaimo and the Vancouver Island area 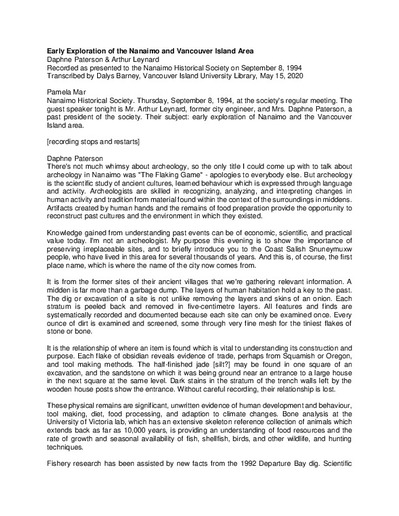 Audio recording and transcript of Daphne Paterson and Arthur Leynard's September 1994 presentation to the Nanaimo Historical Society about archeology, place naming, and surveys in the Nanaimo region. Paterson, a former president of the society, begins the presentation with a brief introduction to archeology and how it can be used to recreate past cultures and the environments in which they existed. Paterson then goes on to introduce the audience to the Snuneymuxw First Nation, and discusses some of the archeological work that has taken place at Departure Bay, the site of a significant Snuneymuxw winter village known as Stlilnup. In the second part of the recording, Leynard, a former City of Nanaimo engineer, speaks about early Nanaimo surveys, maps, and place names, beginning with the visit of Spanish explorers to the Nanaimo harbour in 1791, which they named “Bocas de Winthuysen.” Leynard goes on to discuss other surveys, maps, and charts concerning the area, including those showing coal mines. He details the challenges of storing coal mine plans, and outlines how the City of Nanaimo came to obtain the coal mine maps of Canadian Collieries Ltd. Leynard concludes his presentation by discussing attempts to match surface topographic features to abandoned coal mines, and he outlines how this information can be used as a resource to inform decisions regarding proposed development.