Learning by example: a historical account of the experiences and transformation in the management of the Mount Arrowsmith Biosphere Region (Reserve), Vancouver Island, Canada 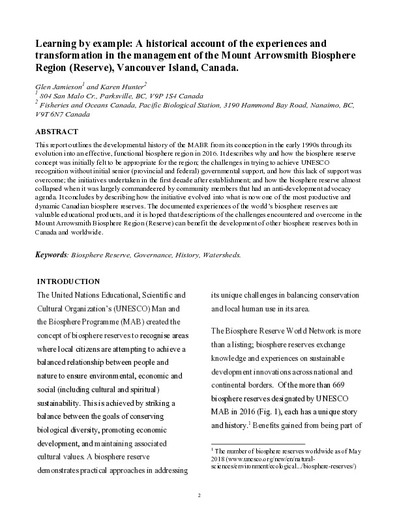 This report outlines the developmental history of the MABR from its conception in the early 1990s through its evolution into an effective, functional biosphere region in 2016. It describes why and how the biosphere reserve concept was initially felt to be appropriate for the region; the challenges in trying to achieve UNESCO recognition without initial senior (provincial and federal) governmental support, and how this lack of support was overcome; the initiatives undertaken in the first decade after establishment; and how the biosphere reserve almost collapsed when it was largely commandeered by community members that had an anti-development advocacy agenda. It concludes by describing how the initiative evolved into what is now one of the most productive and dynamic Canadian biosphere reserves. The documented experiences of the world’s biosphere reserves are valuable educational products, and it is hoped that descriptions of the challenges encountered and overcome in the Mount Arrowsmith Biosphere Region (Reserve) can benefit the development of other biosphere reserves both in Canada and worldwide.