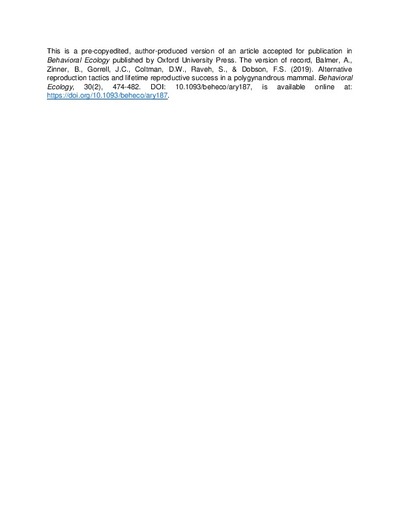 The widespread occurrence of alternative reproductive tactics (ARTs) highlights the diverse ways in which sexual selection can operate within a population. We studied ARTs in Columbian ground squirrels (Urocitellus columbianus), evaluating paternity, lifetime reproductive success, and life histories. Reproductively mature male Columbian ground squirrels displayed either a territorial or satellite (nonterritorial) tactic. Territorial males secured a higher proportion of copulations, were more likely to mate at earlier positions in females’ mating sequences, and sired more offspring than satellite males. The tactic males adopted were largely a function of weight, age, and experience, with larger, older, and more experienced males displaying the territorial tactic. At 2 years of age, males adopted the satellite tactic or deferred breeding for the season. Two-year-old satellite males were heavier than males that deferred breeding, but by age 3, there was no difference between their weights. Males that deferred breeding either adopted the satellite or territorial tactic in the following year, with the lighter males displaying the satellite tactic. The ARTs that males adopted at 2 and 3 years of age led to alternative life history pathways. Males that deferred breeding and only adopted the territorial tactic during their lifetime had twice the number of lifetime offspring compared with males that adopted the satellite tactic and then switched to territorial behavior in following years, although this difference was not statistically significant. Our findings show that the satellite tactic results in lower reproductive output both within a single year, except at age 2, and over their lifetime.