Placemaking through deep cultural mapping: The Where is Here? project 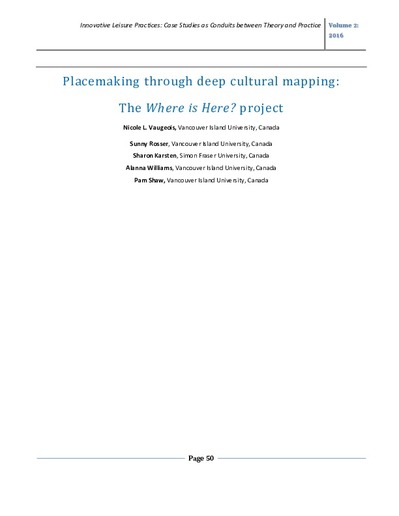 One of the most visible avenues used by small cities to retain competitiveness can be seen in the attempts to revitalize their downtown areas to create places and spaces enjoyed and valued by residents and visitors. Formerly recognized as the heart or centre of small cities, many downtown areas have suffered due to urban sprawl and a loss of connectedness or familiarity among new residents. While efforts to address downtown revitalization are evident such as the creation of public spaces, events and support for small businesses, there remains a need to understand if, and how, residents in small cities value their downtown areas. Small cities are increasingly turning to cultural mapping as a way to identify the assets and values associated to the places and spaces within their boundaries. This case study highlights the Where is Here? project, an innovative initiative to develop cultural maps in three small cities on Vancouver Island, British Columbia, namely in the cities of Nanaimo, Port Alberni and Courtenay. The cultural mapping process included the active participation of local citizens, business owners, municipal development leaders, arts and culture associations, and Aboriginal groups. Three public engagement events or “walk abouts” were coordinated where 85 videos were captured of residents speaking to the places that they felt most connected to in their downtown core. The videos were shared widely in digital form on the project website and collectively, uncovered deep layers of meaning associated to a variety of downtown places. Leisure emerged as a central and embedded theme in the connect spots shared both in terms of the venues profiled and the experiences of residents. Leisure researchers may play a critical role in supporting small city place making initiatives by uncovering and mapping how residents engage with places and spaces within their leisure. Cultural mapping may provide a tool to leisure researchers to aid in these investigations.