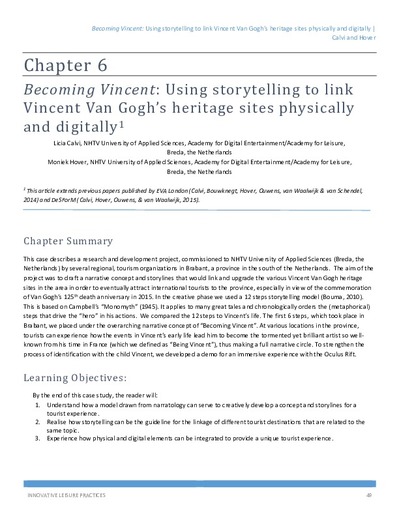 This case describes a research and development project, commissioned to NHTV University of Applied Sciences (Breda, the Netherlands) by several regional, tourism organizations in Brabant, a province in the south of the Netherlands. The aim of the project was to draft a narrative concept and storylines that would link and upgrade the various Vincent Van Gogh heritage sites in the area in order to eventually attract international tourists to the province, especially in view of the commemoration of Van Gogh’s 125th death anniversary in 2015. In the creative phase we used a 12 steps storytelling model (Bouma, 2010). This is based on Campbell’s “Monomyth” (1945). It applies to many great tales and chronologically orders the (metaphorical) steps that drive the “hero” in his actions. We compared the 12 steps to Vincent’s life. The first 6 steps, which took place in Brabant, we placed under the overarching narrative concept of “Becoming Vincent”. At various locations in the province, tourists can experience how the events in Vincent’s early life lead him to become the tormented yet brilliant artist so well-known from his time in France (which we defined as “Being Vincent”), thus making a full narrative circle. To strengthen the process of identification with the child Vincent, we developed a demo for an immersive experience with the Oculus Rift.