Some highlights of Vancouver's voyage on the Pacific Coast 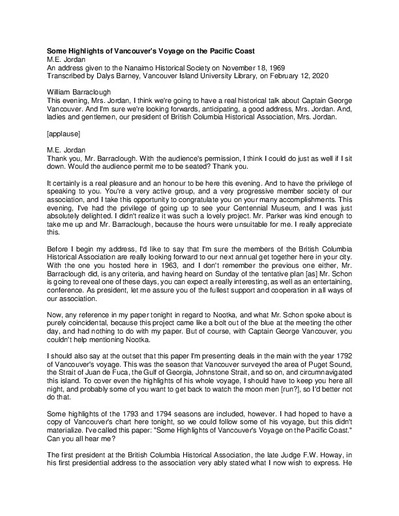 Audio recording of Mabel E. Jordan's November 1969 presentation to the Nanaimo Historical Society about Captain George Vancouver. Jordan, the president of the British Columbia Historical Association, gives biographical details of the British explorer, focusing specifically on his 1791-1795 expedition to North America’s Pacific Coast region. Jordan first provides a summary of Vancouver’s early life and naval career, including his participation in Captain James Cook’s second and third voyages. Jordan then gives a brief overview of events at Nootka Sound, which, starting in the summer of 1789, became a heavily disputed territory. Jordan explains how Vancouver was chosen to not only be the special British representative sent to settle the Nootka dispute, but he was also tasked with making an accurate survey of the Pacific Norwest Coast. Jordan primarily focuses on the year 1792, the season that Vancouver circumnavigated Vancouver Island and surveyed the area of Puget Sound, the Strait of Juan de Fuca, the Gulf of Georgia, and the Johnstone Strait, but she also provides some highlights of the 1793 and 1794 seasons. Jordan concludes her talk with a summary of Vancouver’s life after his voyage, including his declining health and the publication of his journals and charts.