Veronica Milner and her garden 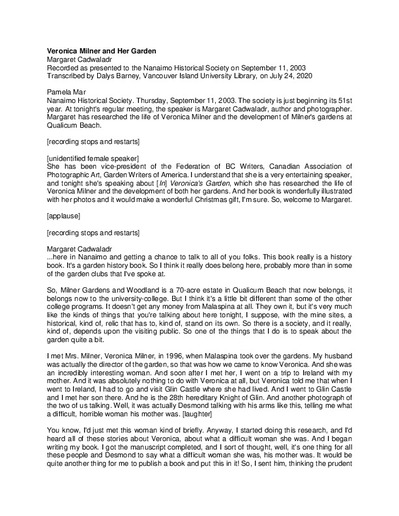 Audio recording and transcript of Margaret Cadwaladr's September 2003 presentation to the Nanaimo Historical Society about Veronica Milner and her 70 acre estate in Qualicum Beach, B.C. Cadwaladr, who authored a book about Veronica Milner and the social history of the garden in 2002, gives biographical information about Milner’s life and that of her two husbands: Desmond FitzGerald, the 28th Knight of Glin from Ireland, and Horatio “Ray” Milner, a prominent Canadian lawyer and businessman. Cadwaladr outlines several of Milner’s garden design influences including: William Robinson, Sir Frederick Moore, Ted and Mary Grieg, and Lord Dunraven (Windham Henry Wyndham-Quin, 5th Earl of Dunraven). Cadwaladr, whose husband was director of the garden, spent a significant amount of time with Veronica Milner before Milner’s death in 1998, and she shares several anecdotes about Veronica, including details about royal visits during the 1980s.