Enhanced performance and visitor satisfaction in artisan businesses: A case study of the evaluation of the ÉCONOMUSÉE® model in British Columbia 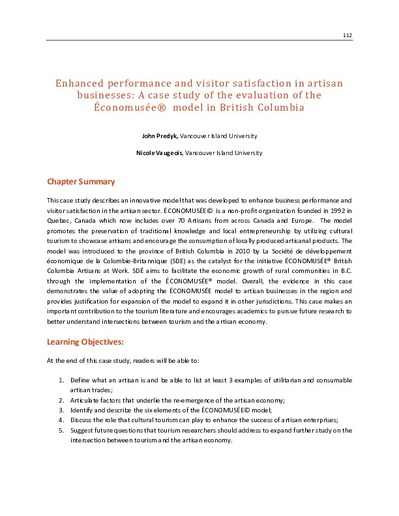 This case study describes an innovative model that was developed to enhance business performance and visitor satisfaction in the artisan sector. ÉCONOMUSÉE® is a non-profit organization founded in 1992 in Quebec, Canada which now includes over 70 Artisans from across Canada and Europe. The model promotes the preservation of traditional knowledge and local entrepreneurship by utilizing cultural tourism to showcase artisans and encourage the consumption of locally produced artisanal products. The model was introduced to the province of British Columbia in 2010 by La Société de développement économique de la Colombie-Britannique (SDE) as the catalyst for the initiative ÉCONOMUSÉE® British Columbia Artisans at Work. SDE aims to facilitate the economic growth of rural communities in B.C. through the implementation of the ÉCONOMUSÉE® model. Overall, the evidence in this case demonstrates the value of adopting the ÉCONOMUSÉE® model to artisan businesses in the region and provides justification for expansion of the model to expand it in other jurisdictions. This case makes an important contribution to the tourism literature and encourages academics to pursue future research to better understand intersections between tourism and the artisan economy.