The story of Protection Island 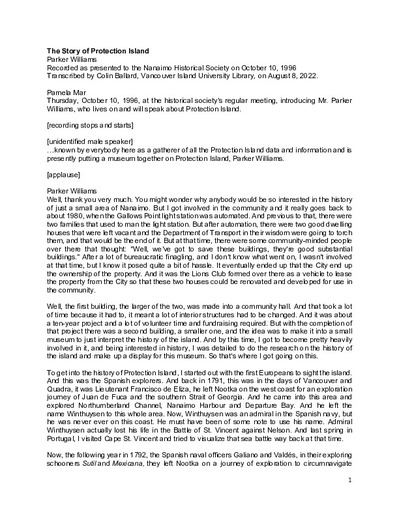 Audio recording and transcript of Parker Williams' presentation about the history of Protection Island to the Nanaimo Historical Society in 1996. Williams, a longtime Protection Island resident, begins his talk with an explanation of how the Protection Island museum was established in one of the former lighthouse keeper's residences. He then goes on to talk about early exploration of the area by Spanish explorers in the 1790s, who named it Winthuysen Inlet. Williams then gives the history of Gallows Point, which was known as Execution Point until about 1900. It was the site of the January 17, 1853 execution of two First Nations men who were found guilt of the murder of Hudson's Bay Company shepherd Peter Brown in the first trial by judge and jury under English law to be held on the B.C. coast. The next section of Williams' presentation covers the coal mining history of Protection Island, including: early exploratory boring; the link with Nanaimo's No.1 Mine under the Nanaimo harbour; and the sinking of Protection Island's own shaft in 1891, with its accompanying headframe, powerplant, wharf, and railway. Williams explains how after eight hour workday legislation was enacted in 1904 due to the efforts of two Socialist members of the provincial legislature - his own grandfather, also named Parker Williams, and James Hawthornthwaite, the Protection Island shaft was used to enter and exit the combined Protection Island/No.1 Mine because the entrance was significantly closer to the workings than the entrance on the Nanaimo side. Williams explains how miners were transported to Protection by a tug pulling a scow, and gives details about the tugs and scows used for this purpose. Williams then goes on to describe several accidents related to the Protection Island Mine, including: an out of control grass fire which blew up the powder house in 1911; the explosion of the Oscar in 1913, which badly damaged the nearby headframe and other mine buildings; and the tragic accident on September 10, 1918, in which 16 miners died when the cage hoisting cable broke. After closing down in 1938, the pithead stood as a derelict landmark for many years until it was burned by Nanaimoites to celebrate the end of World War II. Williams then covers Protection Island's early recreation history, and its eventual sale to Nanaimo Realty in 1959 for $130,000. Williams describes how the island was then divided into 344 lots, a development that was heavily marketed by Frank J. Ney. In 1974, Protection Island became part of the City of Nanaimo, and Williams ends his talk with some of the challenges that came with this change.