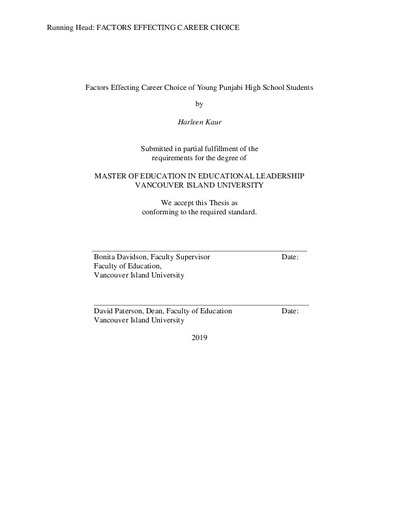 The purpose of this study was to address a problem where students in Punjab are often pushed onto career paths that don’t evoke passion for them. Specifically, factors that influence students while they are selecting their career paths were explored in this study; further, students’ ratings on their respective degree of satisfaction, and how related their career was to their true passions, was also captured and examined. These influencing factors were examined across genders. Quantitative descriptive statistics were used to show the breadth of the problem of influence related to satisfaction. These statistics were shown across genders to reveal the difference that is steeped in Punjabi cultural norms around gender roles. A paper-based questionnaire was used to collect the quantitative data needed. The collected data was analyzed using Box Plots to capture the main influences in selecting career paths, as examined across gender. The participant population were students of Grade 11 and 12 of Government Senior Secondary School, Punjab. There are around 100-120 students studying in 11th and 12th grades of this school. The school is a government funded school and is in a rural area. Sixty-four questionnaires were completed. Analysis of the data revealed that, (a) parents were the strongest influence in a student’s career choice in Punjab, (b) males are much more satisfied with their career choice than females and other genders, and (c) more males felt more passion about their careers than other genders.